Caitlin giving girls and women a choice and voice

Caitlin Spencer is passionate about women and girls playing sport.

She devotes her work and volunteer time to providing women and girls the opportunities to participate in as many sports as they can fit in.

While the St Mary’s Anglican Girls School and University of WA graduate always wanted to work in the sport industry, there was a time when she was uncertain about what role that would be.

“When I did my degree at UWA, I knew I wanted to do sport but I had no idea how many types of roles there were and how many opportunities were out there,” she said.

“Having that broad idea of what I wanted to do was quite hard because I knew I wanted to be in and around sport but I had no idea what was even available.”

After working in various roles at UWA Sport, Caitlin seized an opportunity at the WA Cricket Association working as a Female Participation Project Officer. Before too long, she stepped up to the role of Female Participation Specialist, a position she has held for the past two years.

“I have always loved cricket better than any other sport in the sense of the opportunity to become more inclusive and more engaging because it is a sport unlike any other,” she said.

“It’s got individual sport within a team sport and it actually doesn’t matter if you are a 12-year-old girl or boy or a 28-year-old woman, who has never played before, because there is an involvement for everyone that will help you to start at the beginning and work your way up.”

Caitlin said she always applied the principles of the human-centred design approach to everything she does.

“Human-centred design approach is essentially putting your emphatic hat on and going to the person who knows the best,” she said.

“If I am trying to engage more mums in social cricket then I am going to go to a group of mums who don’t play cricket and ask them: ‘Be brutally honest why do you not play cricket?’

“A lot of females nowadays, girls all the way through to top level to elite, want so much more out of their sport then just sport. They don’t just want physical activity they want engagement, they want social, they want leadership development and they want opportunities to progress.”

In her volunteer work, Caitlin has assisted community sport by creating opportunities for women to play amateur football.

She was involved in the development of the Perth Football League’s women’s competition through her involvement with the University Football Club. And now Caitlin is helping the Coolbinia Amateur Football Club set up its women’s program as the Director of Female Football.

She used her experience in helping create University’s first two women’s team to work with the committee at Coolbinia to field its first women’s team earlier this year. 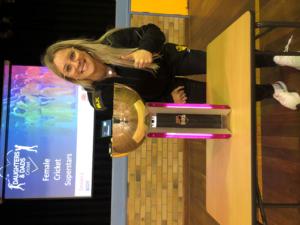 “My enjoyment time outside of working is essentially the exact same as what I do for my nine to five. It has sort of got to the stage where anything I can get my hands on for growing opportunities for women and girls in sport is what I will get my hands on.”

While her day job and volunteer roles are heavily centred on female participation, she was conscious not to pigeonhole herself.

“I still see lot of opportunity in the female participation and engagement space. I am just very conscious that we will get to the point where we don’t need to drive female engagement so heavily,” Caitlin said.

“At the moment, I also do the department marketing and communications coordinator role at the WACA and I have been really lucky to be able to do that, it’s been a huge workload, but it’s such an incredible opportunity for me to be able to branch out a bit but still be able to have my female engagement portfolio.

Caitlin hoped that one day sports would not need female engagement and participation specialists.

“I would hope that in the next 10 years it wouldn’t be female cricket, it would be cricket and you’ve got cricket for girls and women and cricket for boys and men,” she said.

“I think if we got to 2030 and there was still a need for someone in the capacity that I am in, to be doing all the work that I am doing, I think I would be really concerned.

“I can’t speak too much for other sports but Cricket Australia and the WACA invest so heavily in targeted participation, as do local government and DLGSCI. If I think we get to that point and we don’t see a massive shift over a decade then we would need to be taking a pretty hard look at ourselves and going: ‘how are we not there yet?”

Caitlin said she would also share ideas with other sports.

“I am quite lucky in that I know a couple of people in other sporting codes and I have no problem reaching out to the WA Football Commission or Football West or Netball WA and saying: ‘We’ve come up against this, how have you guys done it.’

“I don’t think there should be any stigma around sharing concepts. I think it is hard because every sport in the female participation space wants to be the leading sport for women and girls.”