Nathan Charles said he owes a lot of his life experience, the values he lives by and the person he has become to rugby.

“I can say I’ve lived it and say rugby, from my experiences, teaches you so much off the field as it does provide value and fun on the field.

“I think that is just as important and our point of difference is the values that rugby can teach: discipline, mateship, camaraderie and actually working hard for the person next to you. Then you get on the field, you have fun and you embed those values.”

While Charles has been at the helm of RugbyWA since February, his journey in rugby began in the rugby league stronghold of western Sydney, playing both league and union as a kid. His first professional contract was in rugby league with the Canterbury Bulldogs.

“At one stage, I had a decision to make whether it was union or league. Ultimately, it came down to I felt union had more to offer. It also offered more off the field at that point in time in regards to university and study,” Charles said.

Charles carved out what he describes as a “solid career” where he represented the Wallabies on four occasions and played professionally for the Western Force and Melbourne Rebels in Australia before a two-year stint in Europe with Clermont, Bath and Wasps.

Always with an eye to the future, Charles made the most of the opportunities rugby union provided away from pitch.

“Through professional sport you do get opportunities off the field. Whether that be through access to business mentors or sponsors, which I still have mentors today, and then there were tertiary, education funds and study and the ability to do work experience,” Charles said.

“I made the most of it and found out what I didn’t like to do, which was part of the learning. Education was always a path that I felt was always very important to do for a balance perspective.

Charles said he was proud he finished his playing career with two university degrees and a number of diplomas.

“I wanted to make sure the transition was as seamless as possible because you do get use to a lifestyle whilst playing professionally that you want to maintain when you finish.”

Even though he had a deal with his wife that the stint in Europe was only going to be two years, Charles said he was ready to come home by the end and start his next career.

“I had an awesome time in Europe. I was with two incredible clubs in Bath and Clermont, powerhouse clubs in top divisions so I really, really enjoyed myself but I was also not the player I once was and it was more about enjoying the concept of professional rugby but I grew sick of the injuries and the body was breaking down.”

When he returned to Perth, Charles used his contacts in rugby to start a health and safety and risk management consultancy business.

“I went into business with someone who was very experienced in the health and safety world. We had a really good connection and relationship,” he said.

“It was a learning experience, setting up a business, going through the ins and outs of actually getting work, the direction we wanted to go and finding our niche.

“I was heading down the health and safety, oil and gas path and I then saw an ad on Seek around sports administration.”

Charles applied for a role in athletics to assist with the merging of senior and little athletics which left him with a big decision to make – continue down the oil and gas path or enter sports administration.

“Sports administration was something that intrigued me but I just wasn’t sure about what capacity –it was always something I thought I would enjoy.

“I sat down and weighed up the pros and cons. Financial opportunities were more in oil and gas but then lifestyle and passion was in sport and ultimately, I went down the sports administration pathway and I haven’t looked back.”

After 18 months in athletics, Charles took up the opportunity with RugbyWA.

“I wouldn’t have scripted to be in this role so early in my career but I do have the confidence in my ability and the people around me to ensure that we are successful. The RugbyWA Board have been extremely supportive throughout this process, and for that I am grateful,” he said.

Charles said playing high performance professional sport has given him the knowledge and understanding of how to make teams work.

“I’m level enough to understand where my strengths are and where I require support and to ensure that I have strong people around me to support the operations of the business,” he said.

“Coming into a sports administration organisation, there is such a diverse group of people where you have to understand personalities, traits, what makes them tick, how do you challenge them in the right ways and ensure you are getting your point across but you are getting that point across to so many different individuals that may know rugby and may not.

“High performance sport was a very tight knit group where everyone knows the high level of it, whereas in sports administration you might have some people who work in the organisation who don’t know rugby at all, which I think is a positive. They add a different set of lenses onto our outlook which I think is great but then how do we get that language and terminology and ensure that we are on the same page and heading in the same direction.”

Charles said he was very proud of the work the RugbyWA Development Team had completed this year.

“This year alone we have managed to visit over 26,000 school students just through one of our programs. Without the hard work of our rugby team that wouldn’t be possible and I would really like to reward and celebrate their successes. The future is really bright for us and we are really on an upward trajectory in what we can achieve.”

Charles accepts that sport is competitive however, he believes the focus needs to be on participation.

“In grassroots, kids should be playing every sport and having a crack at everything and I’m not big on being possessive about people playing our sport,” he said.

“Obviously I want [rugby] to grow but I want it to grow through having a great product and a great experience and not just on the field but off the field.”

Charles said growing participation and expanding into regional WA was a key priority for RugbyWA along with increasing female playing numbers.

“I am really passionate about having a statewide plan and opening our programs to the entire state of Western Australia because there are so many untouched communities and regions that I think we can really get rugby in there and get involved.

“I think growing participation, high levels of engagement and actually showing people what we do because we do a lot with our programs and we are constantly fostering and growing the sport of rugby in WA.”

Rugby has been boosted recently with the re-emergence of the Western Force and the Wallabies spending an extended period in Perth after the cancellation and rescheduling of the Bledisloe Cup Test.

“I know as a young, aspiring athlete to be able to see your pathway all the way up to the top is really powerful,” Charles said.

“Just having these role models being present in the community, down at our grand finals presenting medals it gives the young people something to aspire to. It also increases the professionalism of our sport in the state of WA.

“You do have fan days and they are very important but they are very scripted, the players are almost behind barriers and signing booths. Where when I spoke to the Wallabies management about getting the players out in the community it was: ‘There is no expectation around sitting down behind a desk and just signing, I just want you to be there, just be present’. I think that is more authentic.

“WA is a really proud sporting state and to have the passionate sea of blue crowd and supporter base is something that I think all other states envy and having the Force here is an extremely powerful tool.”

Charles said he believed collaboration between sports was a huge challenge facing the industry in WA.

“Everyone has their own priorities and agendas and obviously participation numbers equals funding dollars so I understand those pressures, so how can we collaboratively work together as a community as a whole to achieve the greater outcome?

“I think the new Sports HQ that we are working towards is a huge vehicle for success because it is ultimately going to provide that collaboration through people just being in the same facility.

“I for one am extremely excited about the journey that this is going to take us on. I believe collaboration is at the forefront of it and a sense of community. Just being able to walk to the lunchroom and then you might have head of competitions at swimming with rugby competitions and they are just having a chat about what are your challenges or these are our challenges.

“I think people will find that whatever sport you are in, you are facing very similar challenges.” 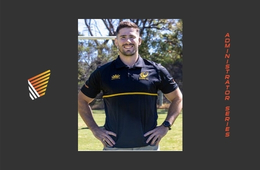