Following Wednesday’s announcement that Commonwealth Games Australia has entered into exclusive dialogue with Victoria to host the 2026 Games, SportWest believes Perth now needs to position itself to host a games, Olympic or Commonwealth, down the track.

The SportWest Board first discussed this in October last year and we have canvassed a range of Members to develop a view about if and/or when Perth should be putting its hand up for a Commonwealth, or even, Olympic Games.

SportWest believes there is certainly an appetite for a Commonwealth Games bid however, we believed hosting the 2026 Games would not have provided the best outcomes for the West Australian community. There were certainly positive outcomes for 2026 relating to tourism but a longer, strategic approach would provide far stronger benefits and outcomes for sport.

With the Games less than five years away, hosting the 2026 Commonwealth Games would not have provided sufficient lead time to maximise the investment required, meaning the legacy of the Games would have been reduced for the West Australian community.

With sufficient lead time, hosting a significant sporting event such as the Commonwealth or Olympic Games provides a legacy platform for the development of new facilities, strengthening of athlete pathways and the opportunity to inspire a new generation to be healthy and active. It is unlikely that hosting the Commonwealth Games in 2026 would have achieved all these outcomes.

New sporting facilities, such as an international standard aquatic facility, or hockey stadium take time to build and at best, we would have had existing facilities receiving minor upgrades to comply with required standards and many of the changes would only have been temporary. This would not provide a legacy for future West Australians.

Also, hosting the 2026 Commonwealth Games would have meant we couldn’t use the Games to develop pathways for athletes and inspire a new generation of children to strive to compete in a Perth Games. The majority of athletes who will compete in 2026 have been identified and are already in the performance pathway.

Assuming hosting a Games is a once in a 60+ year opportunity, 2030 or beyond is a better option for WA sport that would deliver fantastic benefits to the WA community for a sustained period and SportWest urges future hosting opportunities be strongly considered. 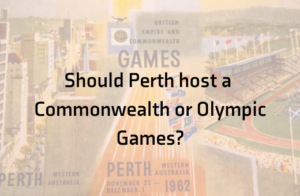