Hart took 7/47 in the recent WA Premier Cricket First Grade Grand Final to lead his side to victory over minor premiers South Perth in a low scoring thriller at the WACA Ground.

Batting first, Subiaco Floreat after a shakey start had moved along to 3/98 before South Perth’s Eric Botha produced a spell for the ages, picking up 6/13 as the Lions were dismissed for 118.

The Subiaco Floreat bowlers made early inroads as South Perth quickly found themselves in trouble at 3/12. Regular wickets kept falling as Hart put in a superb spell of fast bowling, picking up five wickets before stumps on day one to leave South Perth reeling at 8/81.

The next morning, South Perth lost an early wicket to be 9/90 needing 28 runs for a first innings victory.

Liam Dallimore (14) & Simon Ringrose (12*) edged their way to 9/117 before Hart in his 23rd over produced a peach to get the edge which was held in the slips cordon to give Subiaco Floreat the first innings win by a solidary run.

South Perth tried their luck for an outright result however, the Subiaco-Floreat batters were solid to reach 4/150 in the second innings.

Hart’s enormous performance earns him a $200 rebel sport gift card to go with his premiership medallion.

Nominations are now open for the April Award and nominations must be lodged by COB Friday, 6 May.

SportWest Members can nominate individuals, from on or off the field, who are doing great things in WA community sport. To be eligible, the performances or contribution must have occurred during the month of April. 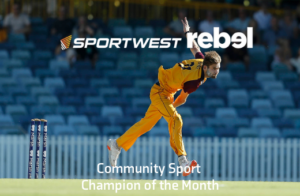