The WA Country Football League has been leading the discussion around men’s mental health for a number of seasons.

Each year, the WACFL runs two promotional rounds: Talk to a Mate Round and the Think Mental Health Round which has ensured mental health is front and centre in regional WA.

“Probably the last couple of years, instead of it being: ‘we’ve got another themed-round’, it was seen as: ‘this is a real benefit’ and the players have adopted it a bit more,” Bottrell said.

“It is actually interesting hearing the players after the game thanking the Think Mental Health Round so, they actually really seeing a benefit in it and the buy in has been great.”

Bottrell said the informal barbeque provided players the opportunity to stand up and talk about their problems.

“We had a really good example this year where a real blokey bloke that, as the session got warmed up and was just about to finish, got up and talked about his problems and broke down in tears,” Bottrell said.

“He’s the bloke you would never think would be upset, he’s tough and that was the great point of the whole exercise – to say well if he’s having troubles then I can talk about it too.”

The WACFL, in partnership with the University of WA, completed a study into the impact COVID-19 had on the mental health of country footballers.

The Get Around Me report found there was a definite, measurable benefit from both a physical and mental health perspective from participating in football.

Some of the findings included:

Bottrell said the WACFL had done another survey this year as a comparison.

“Having all 25 leagues playing this year that will be really interesting to see the 10 that didn’t play last year, if their mental and physical health has improved,” he said.

Bottrell said the next step for the WACFL was to begin educating people in leagues and clubs to support those going through difficult periods.

“Our branding has been really good, the next step is genuine education opportunities,” he said.

“Everyone has the base level of you’ve got to talk up if you are struggling.

“We want to leave a welfare champion in each region so it is someone local so if I am struggling I can ring this person. It’s not us flying into town and flying straight out which doesn’t work as well.”

He said the welfare champions ideally would be someone involved in football but would be open to anyone prepared to assist.

Bottrell said it was difficult to know if the themed-rounds and other programs were making a difference.

“It is hard to say whether if we weren’t doing these rounds and the training whether that would have been more because you never know which lives you’ve saved,” he said.

“I know out through one of the Central Wheatbelt towns in the last 18 months there has been three suicides.

“The feedback has been really positive but it is hard to say whether it is having a profound impact on communities yet. I think once we get the training of the welfare champs in each region that will have a real impact.”

Bottrell said it was important for those who wanted to make a difference and be a part of assisting in the mental health space to get educated.

“If you are unsure, put your hand up to do the training so you can be fully skilled at it but if you are unsure don’t try and diagnose or pass on too much advice, that’s what we have to be really wary of. We are not specialists or experts.

“We will have the full training through Regional Men’s Health or Outside the Locker Room for them to put their hand up and be fully trained and educated on the issue.”

For more information about the WACFL’s promotional rounds visit www.wacfl.com.au 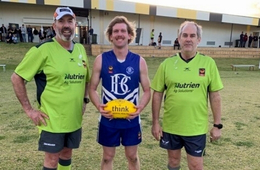