There’s a young man in Kalamunda who wanted to go from living alone, almost cut off from society, to become part of the local community.

Even though he hadn’t picked up a cricket bat since his junior days, he ventured down to Kostera Oval.

Lucky enough for him, the Kalamunda Cricket Club was there.

Though, if not for the efforts of a group of people led by President Kent Millington, that young man might have found an empty oval. A ground without a cricket club.

Seven years ago, Kalamunda Cricket Club, one of oldest in the State, was almost wiped out.

With only two senior sides, four junior teams and no one prepared to volunteer, the club held an annual general meeting where it nearly folded.

“Then one guy, Kent Millington arrives from Tasmania. He played for one year and said: ‘I can’t stand around and watch this happen’, so he volunteered to be president,” Life Member and Junior Coordinator Michael Travcich said.

“Kenny roles up and goes: ‘we’ve got to change the culture of this club.”

Lucky enough, one of the players was the CEO of the Richmond Wellbeing and the club started a pilot program.

“With Richmond Wellbeing, we established the club charter,” Michael said.

“What are the things we are not going to compromise on. Forgetting about what happens on the ground, let’s get off field right first and then we will focus on what happens off the ground.

Michael said another big change was to the club song.

“Our club song was unacceptable”.

“Many small positive changes, like changing the club song to be more inclusive, has steadily seen a growth in player numbers and spectators”.

Michael said it has taken time to change the culture and the ways of the club to make it a more inclusive space not only for players but their families.

“No one is ever bigger than the club and we’ve got off field so right that other clubs have over the last 18 months been talking about our club and the success that we are having off the field,” Michael said.

“When they see our events and they see how many people are here after a game and how many people come to watch now. How may wives and girlfriends and people bring their kids along and that never happened before. It only happened when we started to include everyone.

The culture and values at Kalamunda Cricket Club includes a focus on mental health. The club often has guest speakers and mental health is at the top of the list when talking to new players who join the club.

“You should have enough awareness about you to create some action. Whether that is just listening to them or having a conversation or direct someone to the right avenues and say: ‘hey mate, thanks for opening up to me as we talk about at our mental health nights, you’ve done the right thing. Now I might not be able to help you but I can listen to you and I can get around you but I might not be able to say the right thing.’

“It’s not about being scared of saying the wrong thing but what you should do is go: ‘hey mate, I think you need to speak to someone who does know a lot about this stuff so what can we do to get you in front of the right person.”

Michael said the club’s openness about how it advocates for mental health even makes new players feel comfortable enough to talk about their need for help.

“For all of our new players, we talk about our involvement with mental health and about our club strategy and that this is a club about inclusion. If you’ve got problems or you need help, the place where you need to be is this cricket club because you’ve got guys around you that from today are your teammates and we’re there for you.

“We promote openness from the very start to all of our new players and our current playing group are all very well aware of what we are about.”

Michael believes cricket is a great sport for mental health pilot programs because given it is a long game, it means players spend a lot of time with each other on and off the field.

“But if you actually sat down over a table and said: ‘hey, what are you thinking?’ You’d get nothing.

“That is where cricket is so awesome because it is a long game and there is a lot of time you are in the batting team and for a lot of that time you are not batting. You are sitting there just talking to your mates.”

Back to our young man from Kalamunda…

Because of the changes made to the Kalamunda Cricket Club’s culture and inclusive nature, he is now well and truly a part of a club which nearly wasn’t there for him when he needed it.

“We actually see these guys over winter, they drop out of the circles and the minute that cricket training starts again, you can just see the difference that it has on their lives.”

Michael said the leaders and captains at the club remain connected with their players over the winter months.

“We all do look out for each other and that’s not by chance, that’s by a leader, being Kenny, putting up his hand and going: ‘They’re our mates and we are going to look after them’.

“If before this you had asked me, could one person change the club culture of a club? I would have said absolutely not, it takes a big group of people to be committed to the cause and do it.

“But one person can change it, because Kenny did.”

After nearing folding, the Kalamunda Cricket Club now continues to play in the West Australian Suburban Turf Cricket Association and this season will field five senior teams and for the first time they did not have to actively recruit players.

All their new players came to them, referred by current players, because they had seen firsthand the inclusive environment the club had created. 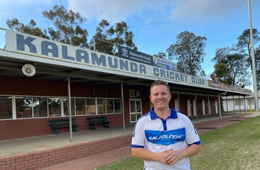