Last year, the club embarked on changing its canteen menu to actively encouraged members, visitors and families to eat and drink better.

The club increased healthy food and drink options and the grant allowed the club to purchase new canteen equipment.

“The dinners encourage kids and their parents to stay, eat and socialise on training nights. Many parents have said how great it is for the kids to attend training and be fed at the club,” she said.

In addition, the club was fortunate enough to access fresh fruit for players and families through SecondBite and were able to distribute this at no cost to members.

Through its hard work and dedication to improve its menu, Harlies Hockey Club was awarded the Healthway Healthy Club Award at the SportWest Awards.

“The award was a great recognition of the healthy changes we had put into place during the 2020 season,” Ms McKie said.

“Having the opportunity to purchase new canteen equipment through the grant became the impetus for the club to rethink our canteen offering and make some significant changes to what it prepared, the way it prepared it and what the canteen sold.

“Through the training provided by WA School Canteen Association, the club learnt about having a balanced menu and actively encouraged our members, players and their families to eat and drink healthily through the Fuel to Go and Play health promotion message.”

Some of the long term changes the club has made to its canteen menu include: 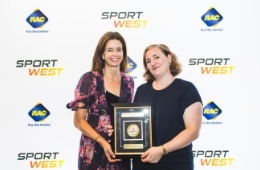 “Firstly, do a menu check and see what sorts of food you have on your menu and what sells. Identify whether there are healthier alternatives to what you are selling,” she said.

“Before Harlies undertook this process we sold a large portion of juice that contained added sugar. Through this process, we identified a 100 per cent juice alternative in a smaller portion size. We also added a few more kids’ drinks: coconut water and low-fat flavoured milk, sparkling water and flavoured waters.

“Another simple change was swapping white bread for wholemeal on our toasted sandwiches and using low-fat cheese.

Ms McKie said on the pitch 2021 had been a great year for Harlies Hockey Club.

“Our biggest area of growth is our junior teams where we have invested time over the past few years to grow numbers,” Ms McKie said.

“Our Hook in2 Hockey program attracted 25 players this year and gives our club a great chance to introduce more kids to hockey. We love engaging these young kids in skills development and the community feel of our club.

“We have a few teams who are contenders for finals this year. We are particularly excited about our 5/6 boys who are currently sitting top of the ladder and who have had a ripper season.” 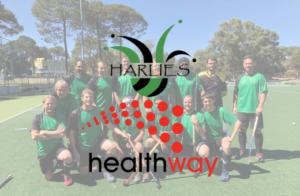