West Australian cycling has been in the spotlight recently following Jai Hindley’s win at the Giro d’Italia and it has provided the sport the chance to reinvigorate itself.

The victory is not to be underestimated. It is akin to winning a grand slam tennis tournament or one of the coveted four golf majors such as the Open or the Masters – it is a big deal.

WestCycle Chief Operating Officer Glenn Te Raki, who has been involved in the sport since his early teens, believes Hindley’s victory has opened doors for West Australian cycling.

“Winning the Giro in 2022 was an outstanding achievement. I think a lot of people don’t comprehend what goes into being a cyclist of that level, being world tour level is one thing but winning a world tour grand prix is the pinnacle of cycling,” he said.

“What we need to do, working alongside AusCycling as the national body for racing, is we need to look at how we can embrace these opportunities created by Jai’s victory to get people out there racing regularly.

“In other parts of the country, we are not only seeing them training weekly but racing weekly and that is our downfall here in WA. We need to be able to get more competition level racing happening out there at the SpeedDome.”

Te Raki said a key outcome of Hindley’s win in Italy was the discussions it has created with all tiers of government.

“It has actually allowed us to have conversations at these federal, state and local government levels around getting facilities, not only in his honour, but also as a recognition if we don’t have these facilities in place, then we are not going to continue to see people coming through the system like we have.

“We are very fortunate to have had a number of our young cyclists come through the system since 2015/2016 through to now with four or five high level professional world tour riders and we want that to continue.”

“We have a very big issue for the sport of cycling where we have a lack of facilities and what we call closed road facilities, where we can run events that aren’t on public roads, or in areas where we need to engage traffic management. We’re really behind the eight ball in that space.”

“We are talking about traditional road racing and traditional criterium summer-type sport events. It’s costing between $3,000 and $3,500 to run these events in just traffic management alone and the clubs just can’t afford it so we really need to work close with our governments to try and open the doors for a cycling facility,” he said.

“We’ve had some really great discussions at local government, state government and federal government level around some facility opportunities.

“We are not only talking road and track but also BMX and mountain bike. There has been some great investment in those areas by the State Government, particularly in the mountain bike trail facility space, but where we are still struggling a little bit at the moment in that road and track space in getting closed facilities off the road.”
Te Raki said another challenge for WestCycle was the need to fill some of the gaps currently in the pathway for up-and-coming competitive junior cyclists.

“We’ve been unfortunate not to have a cycling program at WAIS for the last 18 months. We’ve seen the repercussions of that as well so we haven’t had programs in place for our junior development other than in the club space,” he said.

“There is a lot of work being done at the moment behind the scenes trying to fill those gaps, working with WAIS, working with AusCycling and coming up with a pathway to reinvigorate our grassroots cycling community.”

Te Raki joined WestCycle in 2016 and played a key role in developing a connection between clubs as well as delivering competitive cycling events.

“We worked with four or five of the main racing clubs to develop a racing series that was a little bit higher level than just club racing. We were trying to expose the cycling community to the public to provide more exposure for the sport itself,” he said.

“They became a roaring success. We developed events that were run in high traffic public areas: Leederville, Northbridge, Subiaco and had a great exposure for the sport.”

Te Raki’s deep understanding and passion for cycling has been developed over decades of involvement. He competed during his teens and into his twenties before entering the retail wholesale bicycle industry.

He worked as the Australian and New Zealand distribution for a major Spanish cycling brand and even managed a website which promoted and told the story of the racing cycling community.

It was through this website that Te Raki was able to begin conversations with WestCycle to begin his journey in WA sports administration.

After starting in the event activation space, Te Raki’s role has morphed as has WestCycle’s remit.

In 2020, AusCycling was formed and WestCycle became a peak body for cycling in Western Australia.

Te Raki said WestCycle has focused on the participation and recreation side of cycling.

“Our vision is to have more people riding bikes, more often.

“We work alongside AusCycling from a supportive base and then we are very strong in working alongside Department of Local Government, Sport and Cultural Industries, Department of Transport, Department of Education and the Road Safety Commission for larger outcomes for the cycling community as opposed to just being sport focused.”

He said the key challenge facing WestCycle was how it works together with the national body, AusCycling.

“Peak body and national body need to work cohesively and we need to have a stronger understanding of how we can assist each other to grow outcomes for the cycling community.

“The only way we are going to get better outcomes is by collaborating stronger, certainly in the sport space.”

Te Raki said as the peak body, it was vital that WestCycle continued to identify, secure and deliver State Government grant opportunities for WA cyclists, in particular those rising stars, and that is why collaboration and communication with AusCycling was extremely important.

“I think there has been a little bit of time where we have been seen as being segregated between the national body and the peak body. I think the biggest outcome we need is to get some collaboration happening in that space and I can be honest in saying that we are currently working through that at the moment and I can really see some great early results happening in that space.”

The State Government is currently working with WestCycle, AusCycling and other cycling groups to organise a welcome home for Jai Hindley to celebrate his magnificent achievement. 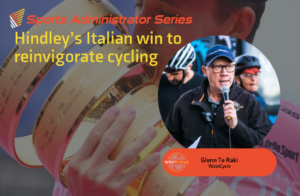