Rachael Lynch is passionate about hockey.

She has appeared for the Hockeyroos in 233 matches, including two Olympic Games, three Commonwealth Games and three world cups.

She is also passionate about mental health and wellbeing and increasing the awareness of the need to look after people and prevent them from spiralling into dark places.

Lynch believes her profile in hockey combined with her training as a nurse gives her a greater capacity to talk about the mental health.

“Sport is just such a great avenue to tie in physical health with mental health,” she said.

Lynch first became involved with mental health officially 10 years ago when a friend asked her to join R U OK Day.

“I really liked their messaging; it was very simple and anyone can use it. It wasn’t about raising money, it was about building connections, talking to people. I loved all of that,” Lynch said.

“They didn’t really have a presence in WA I so I’ve tried to drive that a little bit myself but it has just been a good avenue to promote and implement into my hockey world, into nursing, into every avenue of my life and try and upskill people.

“It is more about the prevention and the wellbeing. Not everyone has a mental illness but everyone is going to go through stuff that stresses them out so the messaging applies to that.”

As part of her work as an ambassador for R U OK Day, Lynch weaves the messaging into her corporate speaking opportunities and has also completed two fundraisers with teammate Ashleigh Nelson.

They walked the Kokoda Track raising $30,000 and then rode from Perth to Albany stopping off in country towns to spread the R U OK Day message to those remote, isolated communities and raised another $35,000.

“We went town to town and tried to visit some of the farming towns and remote towns along the way and do clinics and talk about mental health.

“It is really sharing the message with anyone who will listen.”

“People are open to talking about mental health and we’re really moving forward trying to remove the stigma. I think people are recognising now that it affects everyone in some way and COVID has brought that to ahead for sure.”

Lynch never thought she would be facing her own mental health struggles but that changed in December last year.

Hockey Australia announced former captain Georgina Morgan and Lynch had been dropped from the national squad. The decision to exclude of two of the Hockeyroos’ most experienced players so close to the Tokyo Olympics prompted an appeal of the decision and the potential of the players striking.

If her appeal was not successful, the decision could have effectively ended Lynch’s career just 12 months after she won the International Hockey Federation Goalkeeper of the Year award and seven months out from the Tokyo Olympics.

In April 2021, Lynch’s appeal was successful and she travelled to Tokyo as part of the squad which would be knocked out in the quarter finals.

She said the situation of her non-selection and the appeal had led to her having struggles of her own.

“It was the people around me, my teammates, my friends that I really noticed were using the language. They knew what to do, knew what to ask, knew what to say and that made me feel super proud of the work that I have done that you can see the benefits,” Lynch said.

“I never thought I’d be on that side of it but that made a big difference.”

Lynch said sport in general had changed and there was now a greater emphasis on caring for people.

“I think coaches are learning that you have to treat everyone a little bit different. Mental health and wellbeing has a huge impact on your performance so it has to be addressed and carefully managed.”

She said it was important for community sporting club administrators and coaches to undertake mental health education.

“R U OK started the Hey Sport, R U OK? campaign which is a resource or tool for community sports so that coaches and everyone involved can become equipped with these skills because you are the coach and you might have to deal with things that pop up or it might be one of your kids that opens up to you.

“The publicity is really important to continue to have athletes being brave enough to share their stories but it is really around that education so we have people having positive experiences when they raise an issue or we’ve got proactive things in place to stop people getting into a really dark place.

“If you feel yourself deteriorating being able to have some time off or whatever but you won’t get that unless people are educated.”

While acknowledging that community clubs are run by volunteers and have limited resources, she did have some simple advice.

“There are online resources but if nothing else, it’s listen more than you speak. I think that is a really great place to start because we just all want to speak and solve people’s problems and have opinions.

“If you try and listen twice as much as you speak, you’ll be in a pretty good place.”

The R U OK Tool Kit for Coaches includes materials and resources to build a culture of respect, trust, authenticity and a willingness to support those who might be struggling with life. For more information about the toolkit, visit https://www.ruok.org.au/sport#Toolkitforcoaches 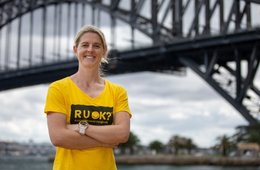