WA’s Madison de Rozario was the highlight for Western Australia over the weekend at the Tokyo 2020 Paralympic Games.

Competing in the women’s 800m T53 final, she claimed gold with a Paralympic record time of one minute 45.99 seconds.

Edmiston’s final throw was an area record 37.85m to finish behind the Chinese pair of Juan Yao and Yue Yang.

Australia’s Spencer Cotie with WA’s Zoe Dix as a ramp assistant will progress to the quarter final stage after winning his first two pool matches in the boccia.

Cotie has defeated Argentinian Stefania Ferrando 4-1 and Great Britain’s Jamie McCowan 5-2 and will now take on Scott McCowan from Great Britain in the final pool match.

In the men’s wheelchair basketball, Australia won two of their three games over the weekend.

Next up, they defeated Germany 64-53 on Saturday as Norris 14 points, Robins 10 points and Blair 4 points were again in the scoring.

Disappointingly, they couldn’t get past the USA who won easily 66-38 on Sunday.

The USA led from start to finish, winning every quarter, as Norris scored 11 points and Robins four for the Rollers.

The Roller take on Great Britain tonight in the final preliminary round match.

In the women’s, the Gliders finished without a win in the preliminary round following defeats to Great Britain and Canada over the weekend.

Merritt again led the way for the Gliders in their 76-37 loss to Canada, scoring 21 points. She was assisted by Vinci (eight) and Natalie Alexander (two).

The Gliders face off against Algeria on Tuesday in the women’s 9/10 classification playoff.

The Steelers were unable to claim a medal in the wheelchair rugby, losing the bronze medal match to host nation Japan 60-52.

WA’s Jake Howe scored one try as Australia missed out on a medal for the first time since 2004. Howe also scored two tries in the 49-42 semi final loss to the the USA.

WA’s Wayne Phipps was knocked out of the men’s judo 66kg in the elimination round of 16, defeated by Mongolia’s Munkhbat Aajim. 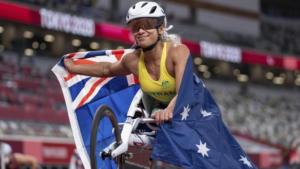