McIntyre was part of the women’s four with Lucy Stephan, Rosemary Popa and Jessica Morrison, who held off a determined charge from the Netherlands to win by 0.34 seconds.

Leading by 1.37 seconds at the 1500m mark, the Dutch combination nearly hauled the Australian team in however, they held them off to win gold and record an Olympic best time of six minutes 15.37 seconds.

It was one of two Australian gold medals at the rowing in the space of 20 minutes on day five of competition.

McIntyre’s gold was not WA’s only medal at the rowing.

Jack Cleary was in the bow seat as the men’s quadruple scull team claimed the bronze medal behind the Netherlands and Great Britain.

The 25-year-old Olympic debutant was part of the men’s 4x100m and 4x200m freestyle relay teams.

WA tennis player Storm Sanders and Wimbledon champion Ash Barty are through to the quarter finals of the women’s doubles after winning their first two matches in straight sets, following Barty’s shock exit in the singles.

In the football, the Sam Kerr-led Matildas have progressed to the quarter finals after a nil-all draw with the USA on Tuesday. The Matildas campaign began with a win over New Zealand (2-1) before going down to Sweden (4-2).

Kerr and fellow West Australian Lydia Williams will now face Great Britain in the quarter finals on Friday at the Ibaraki Kashima Stadium.

The Olyroos surprised Argentina (2-0) in their opening match before going down to Spain (0-1) and will take on Egypt in their final pool match on Wednesday night.

A win should be enough to ensure Graham Arnold’s side, which includes WA’s Ashley Maynard-Brewer, progress to the quarter finals on Saturday.

West Australians Karri Somerville and Georgia Wilson have helped the Hockeyroos to a two from two start with wins over Spain (3-1) and China (6-0).

While the Kookaburras, led by WA’s Aran Zalewski with Trent Mitton and Tom Wickham also in the squad, have started strongly after wins over Japan (5-3), India (7-1) and Argentina (5-2).

In the water polo, Zoe Arancini was part of a perfect start for the women’s team at the Tatsumi Water Polo Centre. The Stingers recorded wins over Canada (8-5) and the Netherlands (15-12) and will face Spain on Friday night.

The Sharks, led by WA’s Aaron Younger and with a squad that includes Andrew Ford, George Ford and Tim Putt, backed up their first up loss to Montenegro (10-15) with a huge upset against world number three Croatia.

The 11-8 victory was the first time the Sharks have beaten Croatia at an Olympic Games. 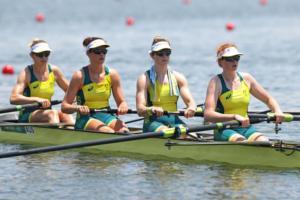