For Daniel Murphy, the opportunity to work in football was just too good to refuse.

Murphy had played and been involved in community football all his life. He was playing with Bencubbin in the Central Wheatbelt when he had to chance to join the WA Football Commission in a competitions role.

Initially, Murphy’s role in football focused on working with the AFL Masters WA and the Metropolitan Football League. However, when a role as Community Development Specialist opened up this season, he was excited to move across to the new role.

“Through the experience of playing footy out in the Central Wheatbelt for Bencubbin and just how much community sport and footy has given to me personally, to be in a role to work in the community space has been really exciting and one I am definitely passionate about,” Murphy said.

Murphy’s background in football combined with his sport and recreation studies at Notre Dame University have prepared him for this role. He also gained experience through work placements opportunities at WA Cricket, UniSport Australia and the City of Cockburn.

His first professional role came as a Graduate Support Officer at the Department of Local Government, Sport and Cultural Industries which provided him an insight into government work and a range of projects. He even got to assist with the delivery of the SportWest Awards.

“Working at DLGSC gives you a lens of how all the state sporting organisations work. It was a really good role to get an overview of how the sports sector works and the different parts to it as well. There were some really exciting projects and it was great to get an idea how the sports industry works from a State Government perspective,” he said.

One of the exciting projects Murphy now works on is the WA Country Football League’s mental health promotion program.

The WACFL was recently awarded an $855,000 Healthway grant over three years to continue supporting mental health and wellbeing to raise awareness and deliver activities for positive mental health in regional communities.

The next step for the WACFL is to begin educating people in leagues and clubs to support those going through difficult periods and Murphy will be playing a central role.

“The WACFL is 150 senior clubs spanning from Esperance all the way up to the East Kimberley so we are trying to engage every club in the program,” Murphy said.

“We want it to be driven from club level so we are not forcing everyone to engage but we are sitting down and discussing with every club to identify what is suitable for them.

“We are really excited by the clubs’ embracement and enthusiasm of the initial three years of our Healthway partnership. We are hoping this will provide a very solid foundation to enhance club engagement in 2022.

“However, I think the challenge is with everything going on in personal lives and work for volunteers is the time they spend at a footy club.

“Some of them might spend upwards of 20 hours at a club and then on top of this we are asking them to engage in education or training that might be three hours in length to two days. It is really challenging for them to engage in that.

“I think it is important to have a conversation, sit down and find out the different capacities and capabilities of the volunteers and then identify an approach from there that is localised and suitable for them.”

Murphy said the ultimate goal was to identify local leaders within communities to head the local response.

“We want to work with each of these leaders and networks within communities to localise the program to them,” he said.

“Once these leaders are identified, we are really keen to work with them, clubs and local networks to co-design the next phase of the program. Sit down with them, identify what’s worked, what hasn’t worked and from there build an approach that is suitable to the club and the community we are engaging with.

“There are some really exciting things already happening out there that stem from the community like the Blue Tree Project or the Alive and Kicking Goals program up in the Kimberley.

“So it is working with our network to identify anyone that is passionate in this space who might want to put their hand up. We plan to provide some relevant opportunities and empower them through education and then work with them to support them to engage in this space and the program.”

Murphy said another challenge for clubs was the number of different mental health programs already available.

“It is really positive to see how many different providers are trying to create positive mental health and wellbeing outcomes for communities, but then that creates challenges for clubs to navigate through who the appropriate providers are.

“What we are really keen to do is make it a more collaborative and coordinated approach for clubs.

“If we can play a role in coordinating suitable opportunities for them, then I think that is a really important role for us rather than the clubs having to do it themselves.” 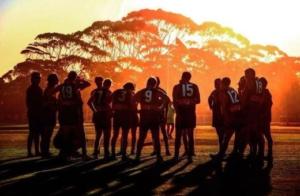