The silver medal was added to the tally on Thursday night after an epic contest in the gold medal match of the men’s hockey.

The Kookaburras lost to Belgium in a penalty shootout after the sides were tied one-all at full time.

Trailing by a goal going into the last quarter, WA’s Tom Wickham scored the equaliser but even though Australia peppered the goal for the rest of the match, they could not find the winner.

The Belgium goalkeeper was superb in the penalty shootout which they won 3-2.

In the track cycling, Australia claimed bronze in the men’s team pursuit with WA’s Sam Welsford part of the team.

Taking on New Zealand, the nations were very tight halfway through the race until one of the Kiwis fell, dashing his team’s chances. Australia soon lapped the Kiwis to claim the bronze medal.

Welsford, who was a finalist in the 2019 Sports Star of the Year, also finished 11th in the omnium and will compete in the men’s madison on Saturday to round out his campaign.

On the track WA’s Peter Bol, captured the hearts of the nation, finished fourth in the men’s 800m.

In a brave move, Bol surged to the lead with 450 metres to run only to be reined in by the Kenyan duo Emmanuel Korir and Ferguson Rotich.

Bol was trying to be the first Australian male athlete to win an individual Olympic medal on the track since the 1980 Moscow Games and the first gold medallist since Mexico City in 1968.

At the diving in the women’s 10m platform, WA’s Nikita Hains finished 21st on debut in the preliminary round.

They will now face Slovenia n the bronze medal match.

While the Opals lost their quarter final clash with the Americans 79-55.

The Matildas missed out on a medal going down to the USA 4-3 after trailing at 3-1 half time.

WA’s Sam Kerr scored one goal for the Matildas in their best ever finish at an Olympic Games.

WA’s Hannah Green is seven shots off the lead after two rounds of the women’s golf.

Despite an impressive round of six-under 65, Green could not keep pace with American Nelly Korda, who shot nine-under 62 which included a double bogey at the last.

Minjee Lee sits tied for 27th at two-under after rounds of 71 and 68 around the par 71 layout at Kasumigaeski Country Club. 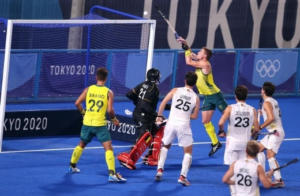