Netball WA has recognised the exceptional service of one of its volunteers, awarding Bev Gallager life membership at last week’s annual general meeting.

Gallager has been involved in netball since she started playing in juniors and she was a talented and dedicated player leading to her first state representation in the 17U state team and an inaugural player with the Southside Sparks in 1989.

Beyond her playing years, she has demonstrated significant service to Netball WA over the past 11 years as a coach, assistant coach, state selector, team liaison, advocate, mentoring and presentation and course delivery.

The Southern Districts Netball Association member is an ambassador for netball across all levels of participation and constantly advocates for netball in WA. Whether it is at club, association, regional or state level, she always puts netball at the forefront.

Netball WA General Manager Community Netball Liz Booth said Gallager was a true role model to all those privileged to work with in netball.

“Her attributes of loyalty, honesty, empathy and integrity has seen her become a tireless worker and volunteer, sharing her belief in and love of netball to all those players, coaches and administrators she works with,” Booth said.

“Overall, Bev’s advocacy for inclusion in netball cannot be underestimated – whether it is for people with disabilities, multicultural netball, walking netball or males in netball, Bev continues to promote and engage these communities, both personally and professionally and link them to NWA Programs.

“Bev represents longevity and commitment to netball in WA and to Netball WA across many areas and she is deserving of life membership as recognition of her contribution across playing, coaching and administration.” 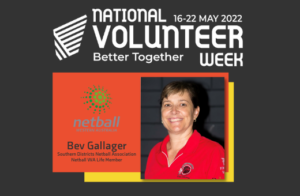