Popham qualified fastest for the final of the men’s 100m Freestyle S8 and bettered that time on the big stage.

At the wheelchair basketball, the women’s side has lost its first two matches of their Tokyo campaign.

West Australians Amber Merritt, Sarah Vinci, Taishar Ovens, Mary Friday, Natalie Alexander and Shelley Cronau are a part of the squad who went down to Japan 73-47. Merritt leading the scoring with 18 points in the loss to the hosts.

Merritt was again the shining light in the Gliders second-up loss to Germany 77-58, scoring 27 points.

Matches against Great Britain (Saturday) and Canada (Sunday) will determine if they advance to the quarter finals.

In the men’s competition, the Australian side defeated Iran 81-39 in their opening game.

West Australians Shaun Norris, Jannik Blair and Kim Robins are in the Rollers squad with Norris scoring 11 points and Robins four in the first-up win.

The Rollers now face against Algeria (Friday), Germany (Saturday) and the USA (Sunday) over the weekend before taking on Great Britain on Monday.

In the wheelchair rugby, the Australian men’s side featuring WA’s Jake Howe lost its first match to Denmark 54-53.

In their second match, the Steelers were all square with France at the final change before outscoring the French in the last quarter to win 50-48.

Howe scored one try in the win over France as captain Ryley Batt led the scoring with 25 tries.

The Steelers next game is against the hosts, Japan, on Friday ahead of the semi finals and classification matches on Saturday.

WA has equalled its highest representation on the Australian Paralympic Team with 24 athletes competing at the Tokyo Paralympic Games.

View the full list of WA Athletes competing at the Games 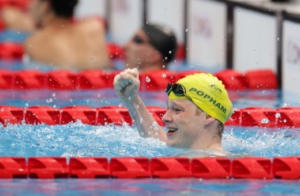