The young and old of karting volunteers

The Exmouth Kart Club has recently recognised two of its volunteers with nominations for two Shire of Exmouth awards – one a founding member and the other a young, up and coming volunteer.

The examples set by these two very different volunteers is a prime example of the broad range of sporting volunteers present in the WA sporting community.

The Club, who is a member of Karting WA, nominated founding member Alan “Waddy” Wadingham for the Shire of Exmouth Exceptional Service Award while Tahli Watkins received a nomination for the BHP Young Volunteer of the Year.

Waddy has been a member of Exmouth Kart Club for 30 years and was instrumental in founding club back in 1992.

He has filled many roles through his time including being a competitor, coach, mentor, official, club safety officer, committee member and club president. He is also currently the State Karting Council Vice President, a position he has held since 2013, which involves travels around WA to events in the role as Assistant State Technical Officer.

“He is an inspiration to many in the karting community and emulates all that volunteering stands for,” Watkins said.

“He thoroughly deserves to be recognised for his tireless commitment over 30 years to our club and the community.”

Watkins said young Tahli Watkins contribution and willingness to help definitely did not go unnoticed from both within and outside the Club.

It was for these reasons why the Club put her forward for the BHP Young Volunteer of the Year, which is presented to a young person (under 25 years old) who has made a significant contribution and who through their volunteering has positively impacted on the local Exmouth community.

“Tahli’s dedication and positive attitude are the most inspiring things about her. People who know Tahli describe her as ‘someone that you can depend on and look to for help’,” Watkins said.

“She is always keen to offer assistance wherever it is needed – fundraising, supervising the canteen, officiating, even chipping in to do track maintenance and cleaning tasks, she is not afraid of getting her hands dirty.

“We have received many a comment from other karting clubs and most often it is: ‘I wish we had members like her.”

Watkins said Tahli has been the backbone of the fundraising efforts this year.

“Without her the club wouldn’t have been able to get results we have. Tahli truly goes above and beyond the required effort to actively create and maintain a welcoming and supportive environment and her drive and ability to manage her personal, academic and employment responsibilities with her volunteering should encourage all of us to work harder and strive for more.” 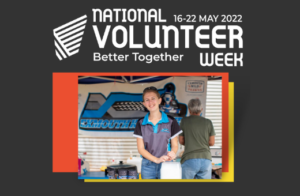