Three clubs in the running for John Gilmour Medal

The revolutioniseSPORT Community Club of the Year award acknowledges clubs who have assisted members or the local community to positively overcome individual, family or community challenges or adversity; are leading the way in creating inclusive and safe environments for people to connect, inspire and achieve together and make a positive impact on the local community.

In previous years, nominations for the Beyond Sport and Community Club categories have often resulted in nominees being eligible for both awards. From 2021, these two categories come together for the revolutioniseSPORT Community Club of the Year and the winning club receiving the John Gilmour Medal.

The finalists for the revolutioniseSPORT Community of the Year are: Northampton Football Club, Leschenault Cricket Club and Dianella Junior Soccer Club.

The Northampton Football Club has gone above and beyond in supporting the local community following Cyclone Seroja.

It has always been a football club that prided itself on its community connection, and this was clearly evident during the past 11 months. The club is creating safe, welcoming environments for all participants within the local district, and has helped a community rebuild and reset following the devastation earlier this year including raising in excess of $240,000 to support the redevelopment of the town.

Leschenault Cricket Club is leading the way in creating a safe and inclusive environment for everyone to enjoy the game and always ensures that inclusive participation is the number one factor in its programs.

The Club created a WA-first “Last Over” Initiative for an adult participant who wants to play cricket however is unable to play an entire game of senior cricket for personal safety reasons. Due to the success of the initiative, the Club is now in the process of determining participants for additional ‘last over’ events this season.

In season 20-21 the club introduced the ‘StarBlast’ program for children with a disability, a Girls-Only Master Blasters program, and a ‘Sunset Scorchers’ social cricket program for women.

Dianella Junior Soccer Club are a community and family orientated club, located within the City of
Stirling and focussed on participation, enjoyment and development. The club boasts 291 junior
footballers.

DJSC has gone above and beyond to make a positive impact in the broader community. The club has supported disadvantaged youth in remote by donating more than 300 uniforms for distribution across the Kimberley at remote Aboriginal communities and soccer associations. This led to an additional drive of football clothing, boots and equipment donations.

The winner of the revolutioniseSPORT Community of the Year will be announced at the SportWest Awards on 24 February at Optus Stadium.

Tickets for the Awards are $95 per person and include substantial finger food and drinks. 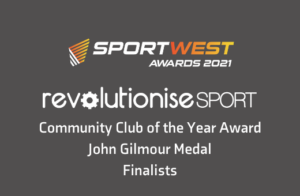