Such was his dominance, Wearn secured gold on Friday afternoon in the men’s laser, only needing to finish the medal race to ensure he stood on the podium.

Wearn finished second in Sunday’s medal race to secure another gold medal for Western Australia at these games.

Her heat swims ensured the Australians qualified for the final in both events and allowed Kaylee McKeown, Chelsea Hodges, Emma McKeon and Cate Campbell to secure the gold in the 4x100m medley relay.

McKeown and McKeon then teamed up with Izaac Stubblety-Cook and Matthew Temple to win bronze in the mixed 4x100m medley relay.

The Matildas won an epic quarter final against Team GB winning 4-3 in extra time after WA’s Sam Kerr netted the winning goal early in the second period of extra time.

The Australians now face Sweden in the semi-final on Monday night.

At the hockey, the Kookaburras needed a shootout to win their way to a semi-final berth.

Tied with the Netherlands two-all after the end of full time, courtesy of two goals from WA’s Tom Wickham, the Kookaburra prevailed 3-0 in the shootout. Goalkeeper Andrew Charter saved three penalties to see the Australians claim the win.

Australia will now play Germany on Tuesday for a place on the gold medal match.

The Hockeyroos won all their pool matches to advance to the quarter finals where they will take on India on Monday.

The Boomers continued their perfect start to Tokyo 2020 after an 89-76 win over Germany on Saturday.

WA’s Duop Reath scored four points from limited minutes in the victory which secured a quarter final berth on Tuesday against Argentina.

Meanwhile, the Opals went down in a close contest to China 76-74.

Their final pool match is against Puerto Rico on Monday Night. They need a resounding victory to finish as one of the two best third place finishers and qualify for a quarter final berth.

The Stingers bounced back from a 15-9 loss to Spain on Friday night with a 14-1 thumping of South Africa on Sunday. WA’s Zoe Arancini scored two goals against the South Africans and one against Spain.

The Sharks went down 16-5 to Spain on Saturday and are out of contention for a medal. WA’s Aaron Younger scored two goals for the Australians who have won one match from their four games.

The athletics got underway over the weekend. WA’s Peter Bol broke the Australian record in the semi-final of the men’s 800m to qualify for the final.

While in the men’s pole vault qualifying, WA’s Kurtis Marschall finished second in pool A to progress to the final.

In the archery, WA’s Taylor Worth was eliminated by Turkey’s Mete Gazoz 7-1. 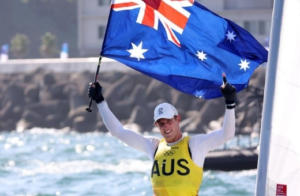