Madison de Rozario is one of the hottest names in WA Sport following her elevation to WA sport royalty at the recent SportWest Awards.

She added the WA Sports Star to two gold medals at the Toyko Games and a victory at the New York Marathon to cap off an amazing 2021.

At just the age of four, after suffering a bout of the flu, the Perth-born de Rozario developed a rare autoimmune disease, transverse myelitis, which left her paraplegic.

Remarkably, the 28-year-old has competed in three Paralympic Games after making her debut at the 2008 Beijing Games at the age of 14.

And all going to plan, will this year compete in a second Commonwealth Games in Birmingham.

De Rozario said can play a big role in breaking the bias.

“Sport is one of the healthiest ways that we can reclaim our own autonomy and you have to have this love and respect for your body and physical self in sport, it’s unavoidable,” de Rozario said.

“It is something that we take away from girls, we take away that and that ownership of our own bodies and how we exist in the world is very much defined by society, not ourselves.

De Rozario said she has noticed a shift in the role women in sport are playing over the past five years.

“We kind of come into it with this idea of who we have to be as people in order to be successful in sport at every single level and what I’ve been seeing in the last five years is this shift that women in sport are creating and again, not just athletes but administration, every single level, to create an entire new pathway. Not just one that works for all women but allowing the space to be anything and everything that you need to be as an athlete, as a person in sport in order to make that work for you.

She also believes that women are demanding change in modern sport.

De Rozario said she looks up to the likes of her co-captain in Tokyo and Rio Dani Di Toro as well as her coach Louise Sauvage.

“Dani Di Toro, she is incredible. She is the kindest human that I have ever had the privilege of meeting. She is someone who I think sets the standard of what it means to be this kind human.

“There are so many women in sport who I have looked up to throughout my entire life. I feel like I’m a combination of all these women who have had some impact on my life and over my career in the last 14 years.”

And some advice for young women dreaming of a career in sport?

De Rozario said it is important to know yourself.

“Don’t try and be anything you’re not.

“Don’t try and fit the stereotype of what you think you need to be.

“You have to have your own reasons for doing this and your own identity because when it gets challenging, and sport gets challenging and life does, those moments do happen and someone else’s reasons are never going to be enough but yours will.

“You need to work out what your reasons are, who you are and why you are doing it and that will carry you through.” 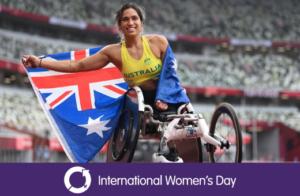