Working together to break the bias

Since starting in the sport industry 14 years ago, Triathlon WA Executive Director Ashleigh Apps has noticed a change in the visual representation of women in sport.

“It’s great to see more females being recognised across the industry for their achievements for officiating, administrating and high performance,” Ashleigh said.

“It also helps that there are more females in more senior positions across the industry and groups like the Women of Sport.”

SportWest recently took over the administration of the Women of Sport program and Ashleigh said it gave women in the industry a collective voice.

“It gives women in sport a bit more of a voice. It doesn’t make it about a lone voice it makes it about a collective. It’s about an ability for like-minded females to be able to come together to share their knowledge and to share their experiences to really grow the industry as a whole.

“The whole theory of a rising tide rises all ships so, if we can all work better together than we are going to make it a better industry for females who are going to follow through the industry.”

Triathlon WA recently formed its own Women in Triathlon committee which Ashleigh said the organisation used to help understand the issues and barriers women face while taking part in the sport.

“We use them sort of as an advisory group and a sounding board to understand the issues that are happening in our sport for females and understand what some of those barriers are and look at ways we can put initiatives in place to attract more people to the sport,” Ashleigh said.

“We are a very lucky sport in that we have the exact same opportunities for males and females, no matter what age from seven to 70 plus, we just don’t see the numbers to provide equity across participation.”

The organisation also runs a number of programs targeted at women including the TRIActive program which is run out of recreation centres and the TRIPink event, which is only for women and held at HBF Stadium attracting 700 participants.

Ashleigh said Triathlon WA was also looking at taking more of a role with the Every Woman Triathlon in the coming 12 months.

“Every Woman Triathlon is a women only event in a friendly environment which is about providing opportunities that are targeted towards female participation, creating safe and friendly environments for them to participate in and celebrating the achievements of those females who are taking part within the sport,” she said.

Ashleigh said it was important for young women entering the sport industry to experience the different facets of sport administration.

“If you are looking to become a leader, to move through the ranks to that CEO role, it is really important to get exposed to many different facets of the industry,” she said.

“I’ve worked across club and member engagement, event operations and commercial and when you move into an executive role you are going to have to have a background and understanding of all of those facets.

“Don’t pigeonhole yourself into one set area, make sure you are getting exposure across multiple areas.”

She said she was extremely fortunate to have a great mentor in the form of her first CEO in the sport industry, former Triathlon WA CEO Hayley Lethlean.

“While she is no longer within the sport industry, she is within the not-for-profit sector, so for me it is actually a great relationship because she has got the understanding and the background in sport but then we also get the opportunity to talk about the wider not-for-profit industry.”

Ashleigh said for the sport industry to help break the bias, it needed to work together.

“In a sporting context, we are really unique that males and females have that equal opportunity to participate in sport but what we probably don’t do enough is actually promote those opportunities or successes of females in sport from a participation perspective, from a coaching perspective and from an administration perspective.

“So for me it’s about highlighting some of the fantastic work that is being done by females and keeping them on the same playing field when we are talking about what’s happening within the industry.

“We understand that everybody has differences and what we actually need to do is to work together as an industry and not to segregate ourselves.

“From my perspective, it is about it is about respect, it is about culture and it’s about leading our sport with values that we want to see trickle through the industry.” 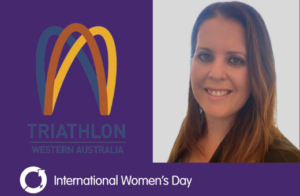